In all honesty, and more than a little respect, NO discussion of Ford commercials can even begin without mentioning Tucson dealer Jim Click.

In the early 1980’s I had done production work for several clients of the George Duncan Advertising Agency. George’s biggest client was Jim Click, and although it took some time, I was finally asked if I would direct two spots for Jim that were to be shot in one morning in his office.

Jim and I got along well. I had a great deal of respect for him and he in turn respected my directing him through his commercials and almost always took my advice. While Jim’s advertising was targeted, they were seldom more than a yellow pad with notes and Jim would ad-lib his way through them. It worked well, especially with his down home country boy tone of voice and speech pattern.

I am proud to report that this single, two spot, assignment has turned into many, many years of on-going work with Jim Click, Chris Click and the Click-Tuttle organization, of which I’m very proud. 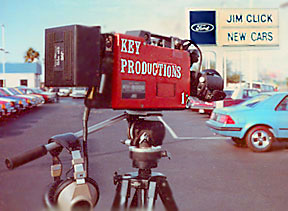 I’m guessing that it was perhaps my Jim Click work that caused the prestigious J. Walter Thompson Agency in New York to hire me, on behalf of the National Ford Dealers Association, to direct a series of national commercials for the 1982 Ford Clearance sale.

This agency had already done the location scouting and had found a small old west set northwest of Phoenix that had pretty much the perfect horse coral and adjacent scenery for the scripts.

I took the larger of our two production trucks for this two day shoot and the comfort and air conditioning it provided in the Arizona desert was well appreciated. I remember that even the Craft Services people plugged into the power from our truck.

I rented a grip truck so we’d have the reflectors and other items you always need as well as a nice camera crane truck. I also went back to my pals at KTAR TV 12 NBC in Phoenix and rented one of their new high end 1″ video recorders and scheduled 3 days of editing time in their new 1″ editing facility. Just as a backup, all of our on location 1″ recording was also recorded in our truck on standard 3/4″ equipment.

I had been told to rent the vehicles to be shown from Mel Clayton Ford in Phoenix and of course for these national spots we had to cover any of his insignia on the cars. Since the cars came from him I ASSUMED that the car jockeys from his lot would drive the cars to our location. I was wrong. The road to our shooting location was NOT a good road and these were new cars. The dealer wanted to KEEP them new and he didn’t want to add to the mileage on them so at the last minute I also rented two auto carrier semi trucks to transport the cars back and forth.