This remote location, 80 miles southeast of Tucson and with vehicle access that was essentially driving in a river bed, was the longest crew commute of the season at 2 hours each direction, making for some long production days as Marty, Misty and Matt Raney solved a number of problems keeping this homestead from being successful.

I must note that I’ve read a lot of conversations regarding fake or scripted reality programs and I’m here to tell you that this is NOT one of them.  This show had a total of 4 producers on location in constant contact with the people from the Discovery Channel, along with 3 camera operators, 2 sound recordists, a bunch of production assistants and drivers, a production manager, a caterer, craft services, 9 talent…and other carpentry, solar and hydroponic people…for a total location crew of 25-30 people….and none of the production crew knew for sure what was going to happen next until we heard on the radios that someone was doing something somewhere that needed to be covered.

One of the few planned items was when you see the Raneys drive up to the homestead on the 1st day of production. For this microphones were already hidden on them and cameras were mounted in their truck. This really is the first time they’ve met the homesteaders. After this first meeting, and throughout the shoot, they move from project to project as they want and it is up to the production crew to keep up.

The crew shoots as much as possible and probably average 15 hours of material every day generating perhaps 130 hours that must be edited down to an understandable 41 minute program. Of necessity much gets left out. On this episode I was sorry to see the time Marty Rainy encountered a scorpion while adding support and leveling the house didn’t make it. It was really funny. In fact, very little of that major project made it to air.

One of the issues shooting reality television is that you ARE trying to tell a story even though you might not be totally clear what that story will be. So from time to time we shoot OTF (On The Fly) interviews where the producers pull the talent away from the action and have them explain on camera what is happening and what is planned so that the audience will understand the story.

Sometimes during post production editing, weeks or months after the shoot, the editors find that the OTF explanations aren’t sufficient. Then requests go out to the field crews to do pickup shots to better tell the story so time has to be stolen from whatever location they are on to pull the talent aside OTF and have them further explain what was going on in that earlier episode. These OTF’s are then edited into the appropriate episode for broadcast.

Here is an example of OTF’s I got during this episode to be used on an episode shot in Louisiana a couple of months earlier.  For these OTF’s we took the talent aside to an area that really couldn’t be identified as Arizona, wardrobe supplied the same clothes they’d been wearing in the other episode, and we shot what was needed.  Here you’ll see our Arizona OTF’s edited into the earlier episode.

The promotional photo below was taken while I was waiting for the talent to shoot an OTF. 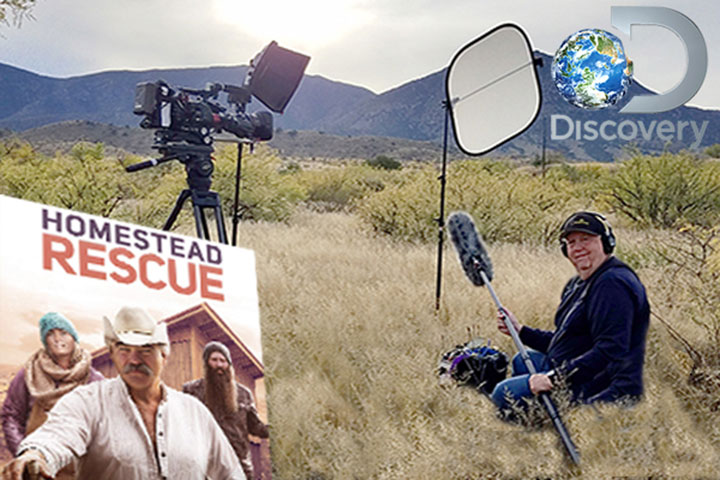 It was very refreshing to work with these experienced
professionals and I’d gladly do it again….which is not always the case!